Lynda Kiejko is a competitive pistol shooter from Calgary, Canada. She is a 2016 Rio Olympian and is proud and excited to be representing Canada this summer. So far her campaign has reached 57% of her $12,000 total campaign goal with 26 days remaining. Lynda has big shoulders on which to climb because she is the third member of her family to become an Olympian. 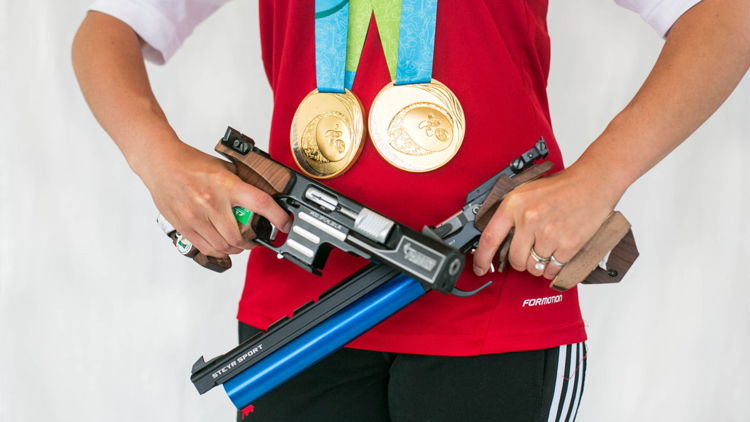 Lynda began her began her crowdfunding campaign so that she could bring together all her supporters across the country. She wanted to give anyone interested an opportunity to join her journey. This is her first crowdfunding campaign and she chose MAKEACHAMP because it enabled her to give back to her supporters. Furthemore, she chose MAKECHAMP because she receives a higher percentage of funds and she is humbled to join so many great athletes with that use MAKEACHAMP.

Lynda mobilised her crowd through social media, it really helped get the ball rolling. There are core supporters that have been following Lynda for years and she asks them to spread the word. Her biggest form of success came from the people around her who shared her story with their networks. Give backs are very important as well and it shows how much supporters and contributors mean to your campaign. She also has had lots of individuals and companies thrilled to get exposure on her personal sports website.

Receiving contributions is amazing for Lynda, she is so grateful and surprised by the great support. Words of encouragement mean the most to her. There are people she has never met who have sent her words of encouragement and inspiration, the fact they are supporting her, gives her strength and confidence.

So far Lynda’s sporting adventure has been incredible adventure! She has been competing for 24 years, 17 years internationally. Lynda presents a series of highs and lows of her sporting career so far.

Highs: 2010 Commonwealth Games Bronze Medal for 10m Women's Air Pistol Team, where her teammate was her sister. It was the first time in their sports careers that she got to be a team. It was amazing to stand with her! Other high was the 2015 Pan Am Games, Double gold Medalist in the Women's Pistol Events, competing in front of a home crowd, hearing the Canadian Anthem, it was truly incredible!

Lows: 2003 Pan Am Bronze Medal, it was a great achievement for her, but she narrowly missed qualifying for the Athens Olympics. 2005 her dad, who was also her national team and personal coach, passed away very suddenly. She had a lot of soul searching to do after that. She had to have a lot of conversations with God, and realized her own passions and motivations for sport.

Her physical preparations start with preparing for a competition about 4 weeks in advance. She has a plan to follow for her training, and it goes right up to the moment she steps up to the line, through her competition. She has a workout plan 5 days a week, and she is usually training 5-6 days a week. Her training plan varies depending on what stage of preparation she is on. She works regularly with her Chiropractor, Massage Therapist and Sport Psychologist, they are incredible and she wouldn't be here without them!

Lynda had many personal goals this year: qualifying to Rio was the main one and that succeeded. Her next goal is to compete well at the Olympics. All while not losing perspective of life's priorities. She is married with a young child, having family time in with all the training is very important to her, as is finding time in all the preparation to pray, and ultimately be thankful for all of the incredible opportunities and wonderful people around her. It's the balance of all these thing that will lead her to success.

Lynda defines “Inspiration” as the drive to be something better than you are, to help you see the potential in yourself, and continually improve past your expectations. She would not be successful without an incredible and tireless team of supporters. Her husband is hands down the most supportive person. Her coach who travels with her and pushes her further, and challenges her to always find solutions. The range in support, from friends who train besides her, to range officers and to spectators. Lynda competes in an individual sport, but no success is achieved alone. She has an incredible support network, that Makeachamp has reminded her of actually how far that support reaches, and she will be forever grateful to everyone for it!